The Flat River Community Players continue their 2018 theatre season with “Urinetown, the Musical,” the Tony Award winner sometimes known as “the terrific show with the terrible title.”

What can one say about a show with a title so unpleasant it’s a running gag in the dialogue? Bathroom jokes aside, “Urinetown,” a musical comedy modeled off the satire and parody of Kurt Weill and Bertolt Brecht, is about a person’s right to pee for free. One Broadway critic dubbed it “The Spend-a-Penny Opera.”

The story is rather dystopian. In the not-too-distant future, a 20-year drought has caused such a severe water shortage that private toilets have been banned by law. People must pay increasingly high fees to use public facilities. Run by a mercenary company, the monopoly over these pay-toilets has made poor citizens desperate and rebellious and the corrupt officials wealthy and cruel. Anyone caught “going in the bushes” to avoid the fees is arrested and sent to the dreaded and mysterious “Urinetown.” 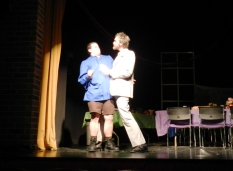 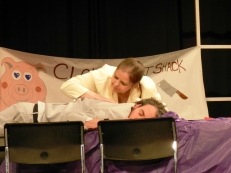 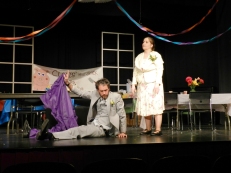